This article will enlighten your knowledge for investing in the Best Weapon Skins in CS:GO. The recent Counter-Strike i.e Global Offensive has a pretty decent feature added to the game: Weapon Skins. These visual perks are enough of a reason for anyone to empty their wallets. We will be ranking the Weapon Skins based on our opinion. Also learn about the CSGO floats value of the weapon skins through our range chart mentioned below.

Let’s start with the most lethal and badass weaponry in the game.

The AK-47 or the Avtomat Kalashnikova is one of the most lethal and economical weapons in the game. It has the capability to one-tap any opponent irrespective of the armor or distance. It’s quite obvious why people would invest in the AK-47 skin as an opening ceremony. 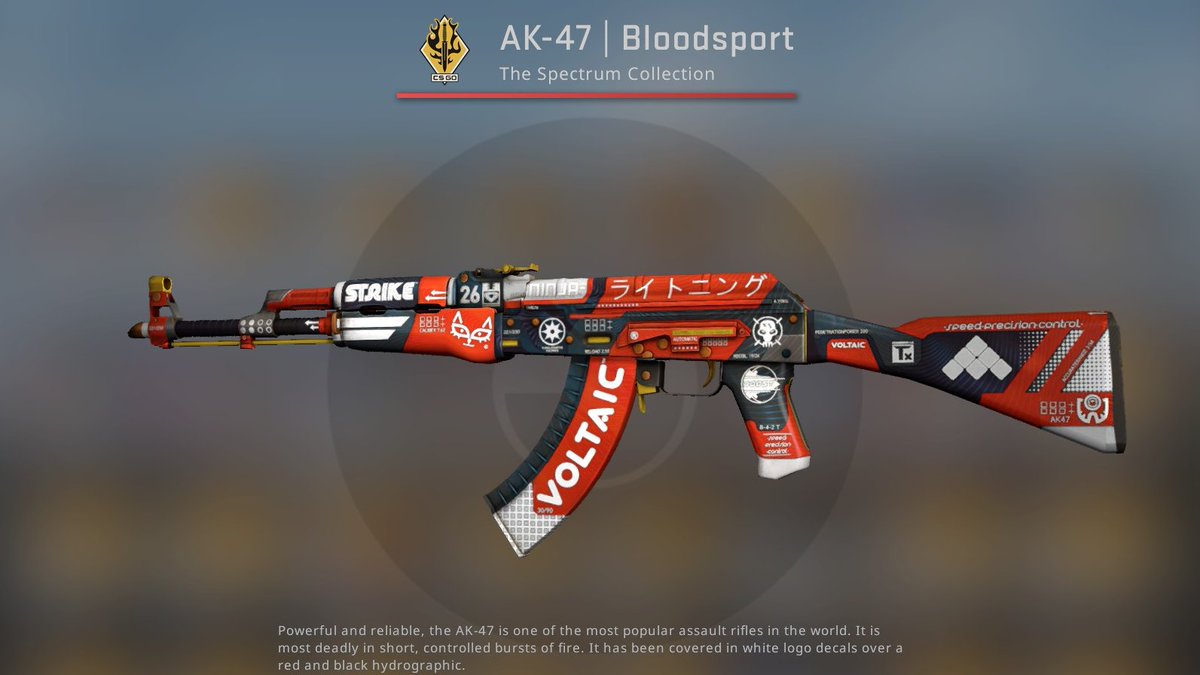 The  AK 47 | Bloodsport was first added to the workshop on the 16th of March in 2017. It had a starting price of 34.13$. It was obtained either from the market or from the Spectrum Case. Due to its flashy decals and designs, it attracted our attention to it almost as soon as it was released. The AK-47 | The Empress was first added on the 14th of September in 2017. It had a starting price of 23.85$. It can be obtained either from the market or Spectrum 2 case. Personally, this is the most affordable and intriguing skin I’ve seen for the AK-47. The AK-47 | Asiimov was first added to the workshop on the 6th of December in 2018. It had a starting price of 23.16$, pretty close to that of The Empress but still, I’d prefer The Empress over Asiimov. Asiimov Family consists of large variety of weapons like – P250, M4A4, Ak47, AWP.

The M4A4 is second to the AK-47 as a rifle in the game and only available to the CT side. It is the most lethal weapon for the CTs. One of its demerits are that at long distances and using helmets, the M4A4 is unable to deliver a one-tap. Trust me, its quite unsatisfying. But anyways, it has a pretty decent recoil pattern to control. 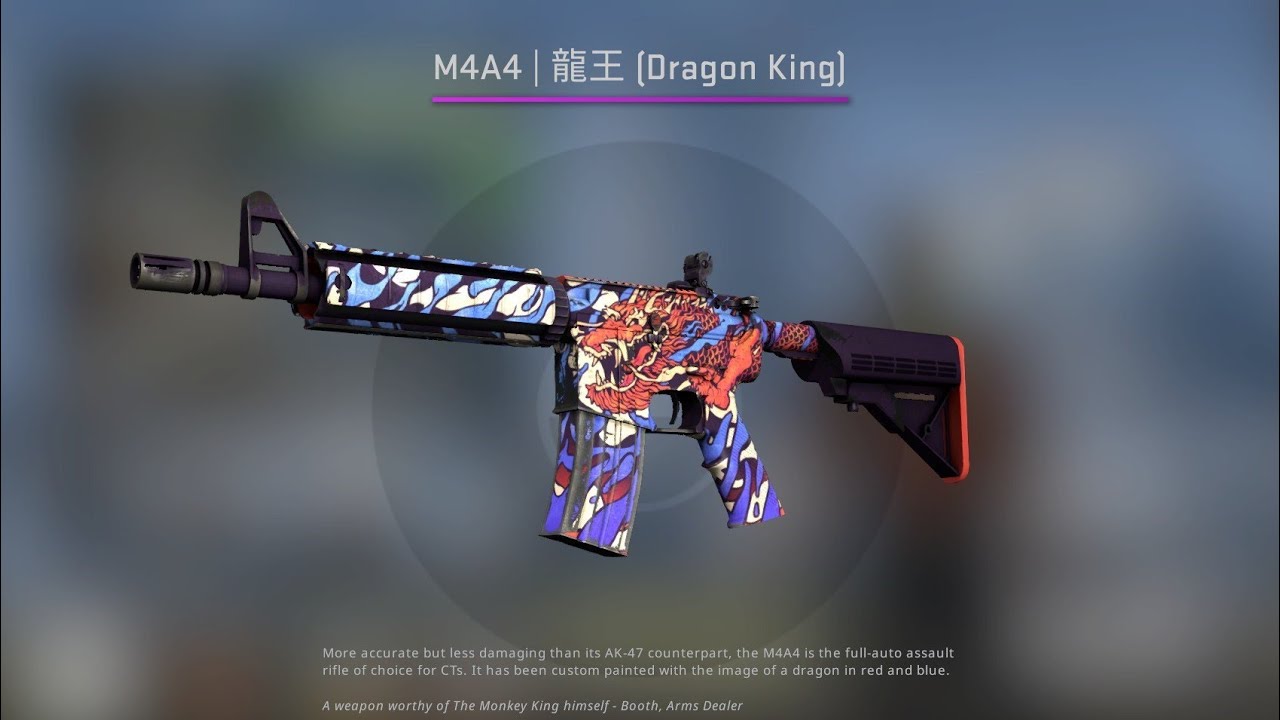 The M4A4 | 龍王 Dragon King is one of the most beautiful skins in the game. The purple-ish tint is what makes it beautiful to look at. It was added on 2nd of January in 2015 and had a staring price of 6.94$. It was obtained from Chroma case or form the Steam Market. 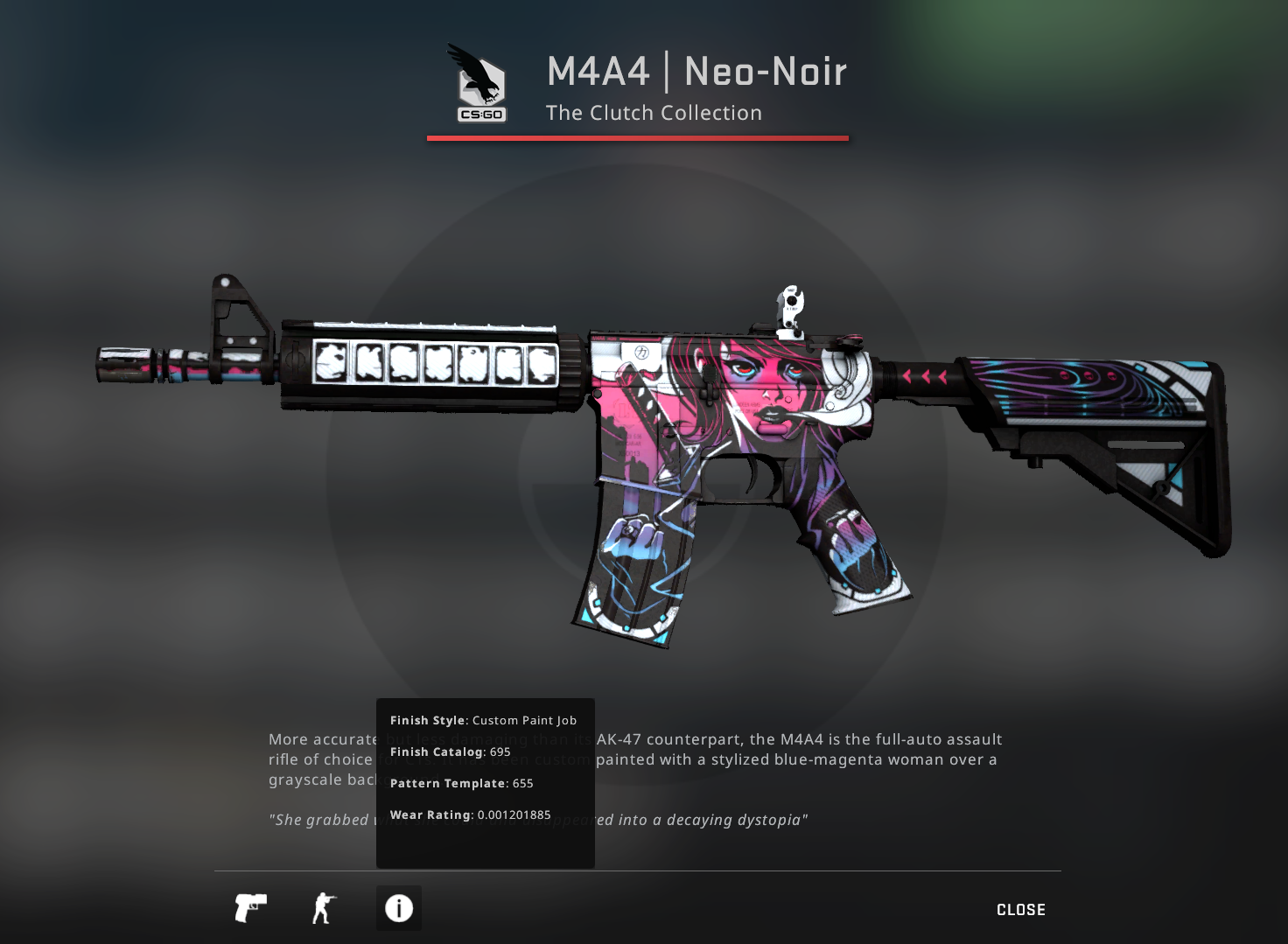 The M4A4 | Neo Noir is the 2nd best skin in my inventory. The purple-black tint is what makes it so calm to look at. It was dropped in steam workshop on 15th of February in 2018. It had a starting price of 12.90$ and was obtainable from the Clutch case or from the Steam market. Even In Neo-noir family, it has USP-S and AWP for the collection.

The M4A4 | Hellfire is quite rare as not many people invest in it but personally, it piqued my interest visually a lot. It had a starting price of 10.91$ and was added on the 23rd of May in 2017. It was obtained from the Steam Market or from Operation Hydra Case.

The M4A1-S is also only exclusive to the CT. It is a more silenced version of the M4A4 and has a better recoil pattern.

Personally, I also like its bullets’ sound effects. Visually, it’s a beautiful weapon. 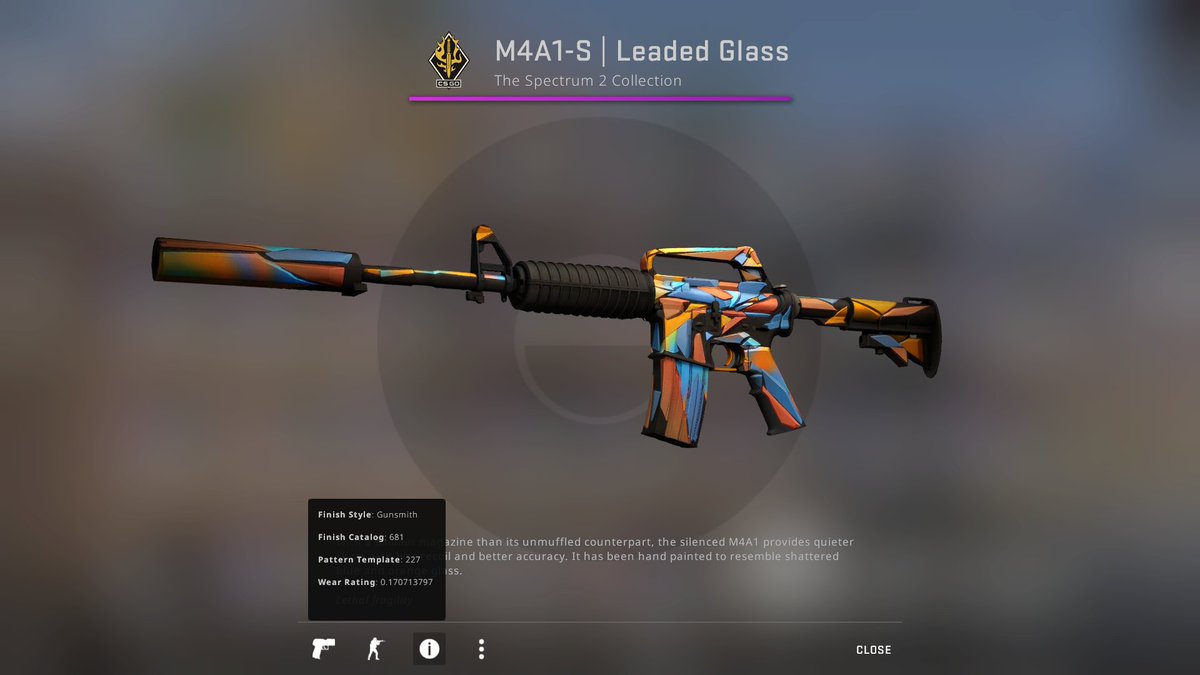 The M4A1-S | Leaded Glass is quite artistic and resembles the so called “Modern Art”. The design is interesting enough to let people invest in them. It was released on the 14th

of September in 2017. It had a starting price of 1.95$ which was surprisingly ridiculously cheap. It was also included in the Chroma 3 case. 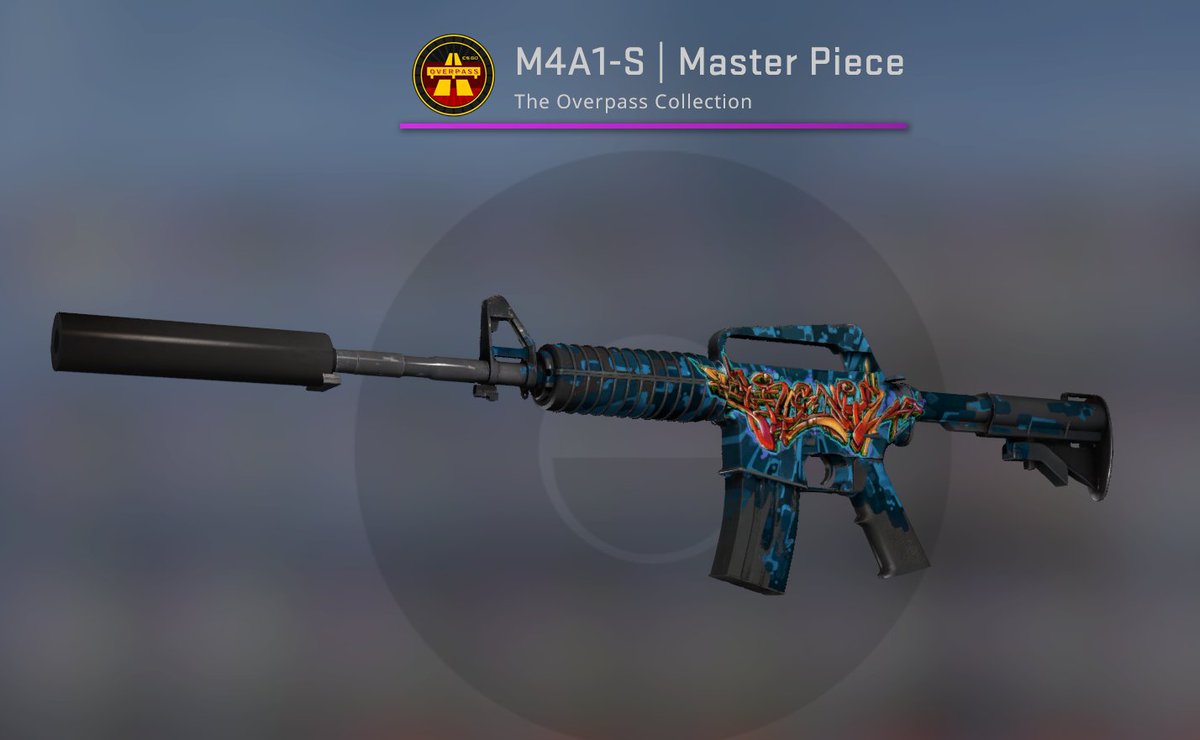 The M4A1-S | Master Piece is more like a Classic Graffiti Art if you ask me. It had the OG street vibes and to be very honest it attracted my eyes. It was released on the 1st of July in 2014. It had a starting price of 23.83$. It was obtainable from the Steam Market only.

For all you OG Counter Strike Players, this is the Magnum Sniper Rifle and trust me, the power and fame are still up to the mark. It stands for Arctic Warfare Police. Also, personally this weapon has the best skins in the game. Dare to pick or peek it. 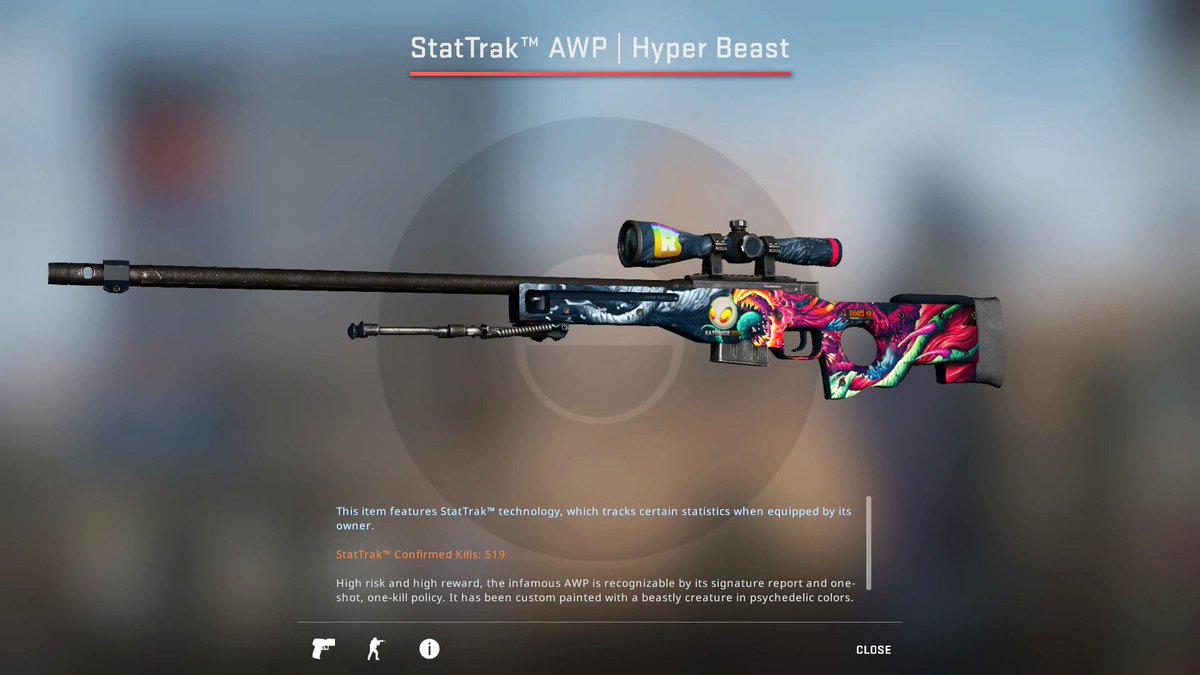 The AWP | Hyper Beast is the BEST skin in the game overall as my opinion. The mix of contrast and beautiful monster vinyl is my favorite. It was released on the 26th of May in 2016. Pretty old yet mind blowing. It was priced at 21.02$ and was available in Falchion Case. Hyper Beast is also available for M4A1-S. 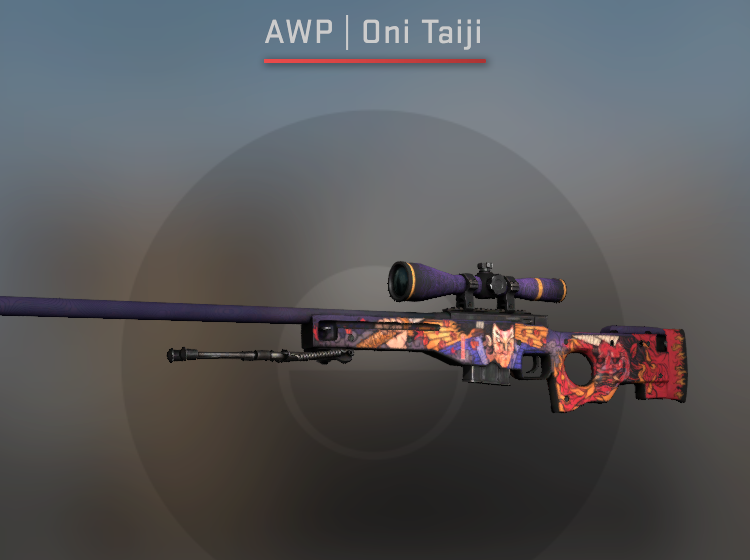 The AWP | Oni Taiji simply says – ‘Face your demons’. Pretty dope, right? Anyways what interested me the most about it was the great design of samurai and that purple tint. It was released on the 24th of May in 2017. It had a whopping price of 48.74$ and was included in Operation Hydra Case. The AWP | Fever Dream totally gives off the Joker vibes based on its decals and patterns. I love this skin in my inventory though. It was released on 15th of March in 2017. It had a starting price of 3.82$. It was also included in the Spectrum Case.

The good old Scout is one of my favorite weapons in CS:GO. What makes it so special is its mobility as a sniper and its penetration. But it requires real skill when it comes to using it as only headshots are lethal. Best Gun when you love scopes but money hates you. The SSG 08 | Dragonfire is one of the best Scout skins in the game. This design literally screams its title out loud. I loved how the design adapted to its actual name. Its really apt. It was launched on the 29th of November in 2016. It had a price of 6.32$ and was included in the Glove Case. 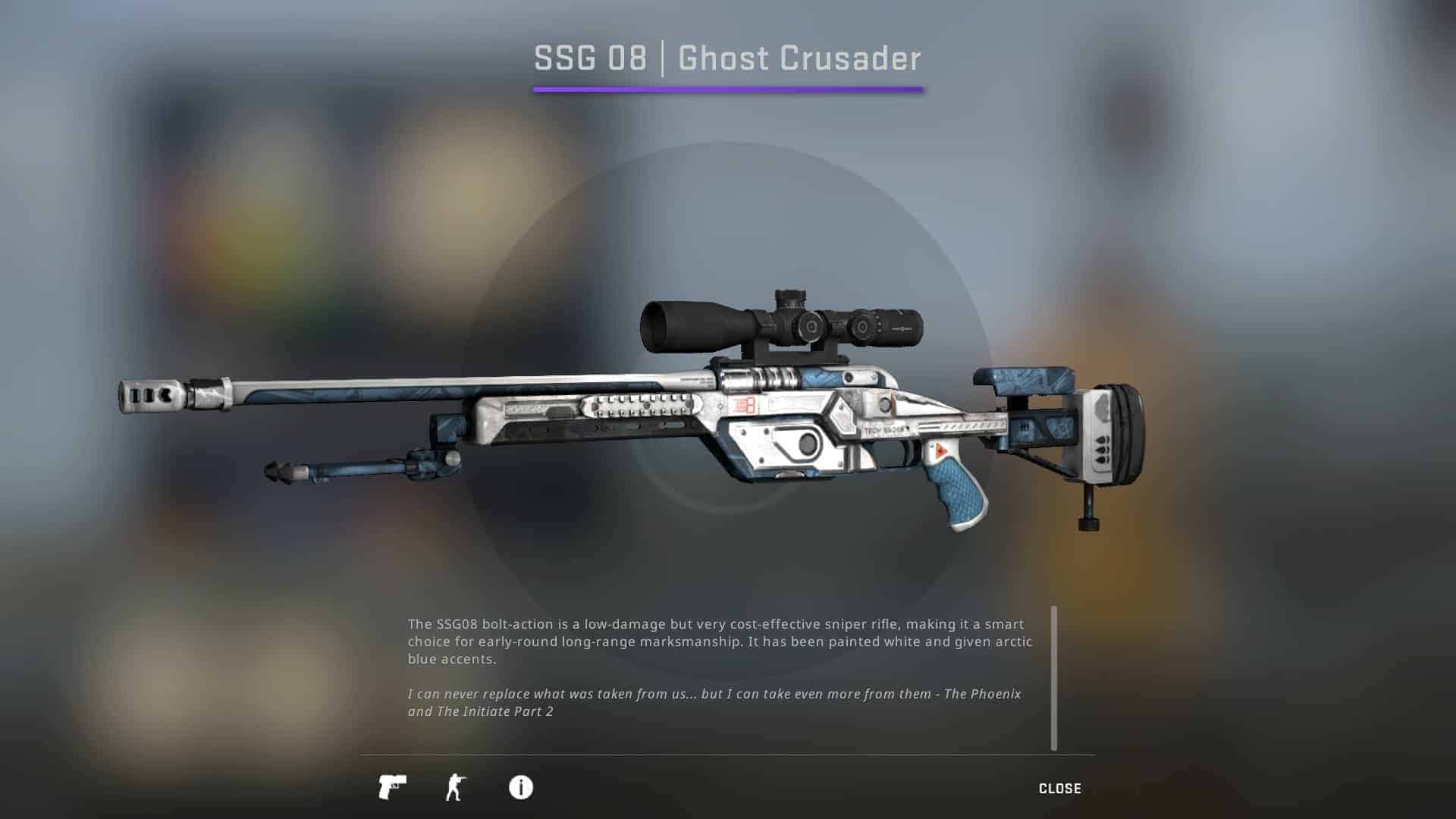 The SSG 08 | Ghost Crusader is more like a mechanical skin design because of those abstract lines and colors. Loved the vibe that it gave off. It had a price of 0.45$ and was released on the 28th of April on 2016.

This is the real deal as it requires so much skill to master those headshots. Personally this is the only weapon that took me years to master. I soon realized why it was called the ‘Desert Eagle’. The most satisfying part with this gun is when you kill the awper when your pockets are tight. 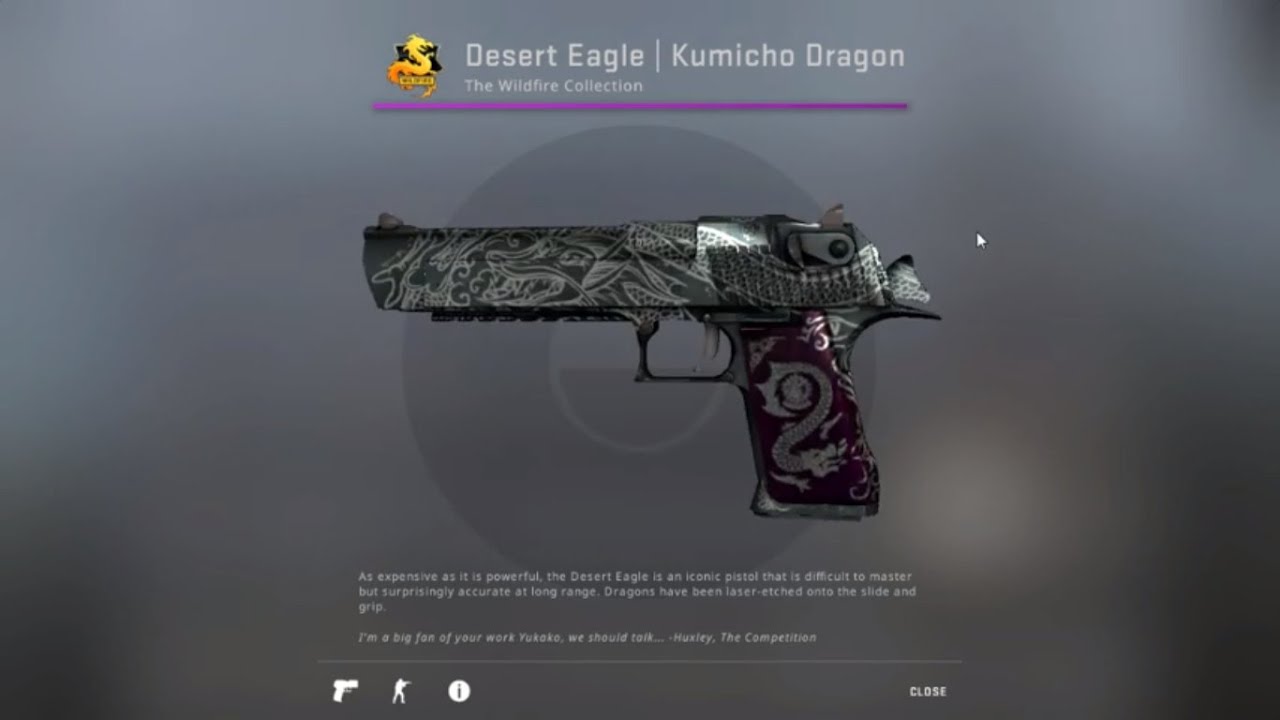 The Desert Eagle | Kumicho Dragon is my favorite Deagle skin and it literally screams in Japanese. It gives off those Japanese Yakuza vibes from it. It was released on the 17th of February in 2016. It was priced at 6.18$ and was included in Operation Wildfire Case. The Desert Eagle | Mecha Industries to me, seemed like a rip-off version of Asiimov for the Deagle which turned out well. Honestly, I liked the idea of this skin and its quite interesting to look at. It was released on the 6th of December in 2018. It had a price of 2.53$ and was included in the Danger Zone Case. 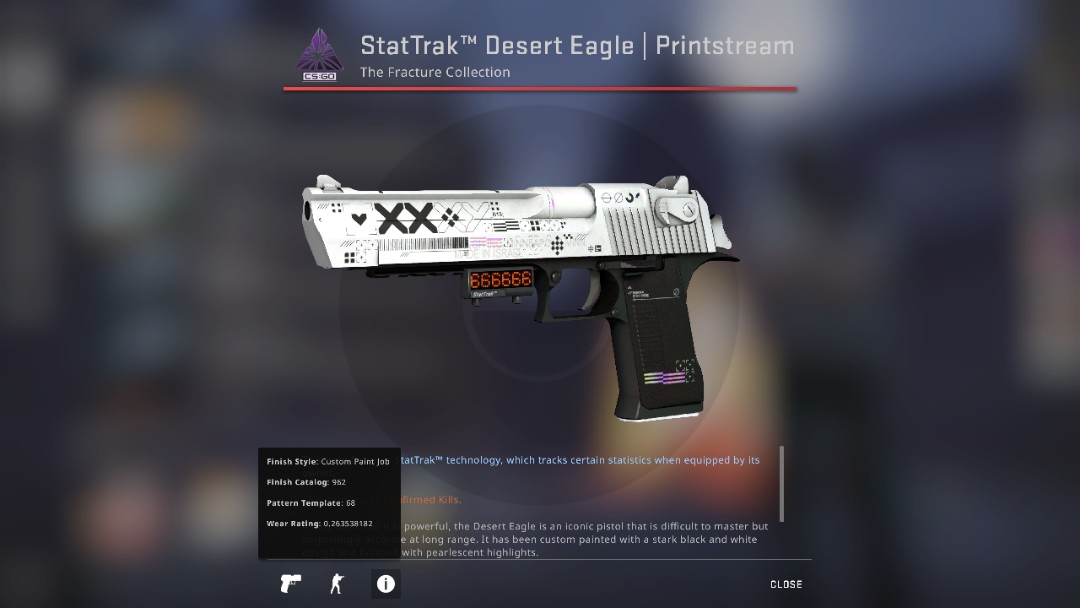 The Desert Eagle | Mecha Industries has a seperate fan base than others. It seems pure white in normal light, but its nature is holographic. It turns into pinkish white with some strokes of blue which represents heavenly type of color and its quite pleasant to watch.

Floats- What are Floats?

Floats are an important factor while purchasing a weapon skins. Float value indicates the quality and the wear of the skin. It all the ranges from Battle-Scarred(Lowest) all the way upto Factory New(Highest). Float value decides the prices of the skin and varies accordingly. Good Float value at a lower price is just like a rare gem.