“Among Us” is a name that needs no introduction in the world of gaming. It is an online multiplayer game inspired by Mafia game and The thing ( a science fiction horror film). It was released by American Game Studio Innersloth in 2018. First, it was available for android and iOS and later launched for Windows as well. Soon it will be released for PlayStation 4, PlayStation 5, Xbox One, and Xbox Series X/S in 2021.

“Among Us”  can be played with four to fifteen players. In which three players are randomly chosen to be the imposter in every round. The game has a total number of 4 maps : spaceship called “The Skeld “, a headquarters building called “MIRA HQ”; a planet base called “Polus”; or “The Airship”, which is based on the Henry Stickmin series by Innersloth.

In the beginning of the game, the players are assigned with tasks, what they need to finish to progress in the game, which involves; downloading data, fixing wires. Imposters have a fake list of tasks, so they can disguise themselves with the team easily. But they can’t perform those tasks for obvious reasons. Their main job is to sabotage the vital system, travel through vents, and work with the imposter team with an aim to kill a legitimate crew mate. If a player dies in the game, they turned into ghosts and after that, they will be able to pass through walls and chat with other ghosts, sounds like routine ghost things, right. Ghosts are very helpful with their living teammates, as they helps them in finishing their tasks or by performing sabotaging activities as an imposter.

An imposter wins the round only after killing enough crew mates or by making sure that the crew member fails to solve the problem caused by an imposter. The players have to spot the imposter and vote the imposter off the ship or by completing the assigned task. That’s the only way they win and save crew mates for being bait.

Among Us mods can help you finish your game in less time. It can also help you in recognizing the imposters and a lot more. Basically, it provides you more access to the game.

How to install Mod in Among Us : 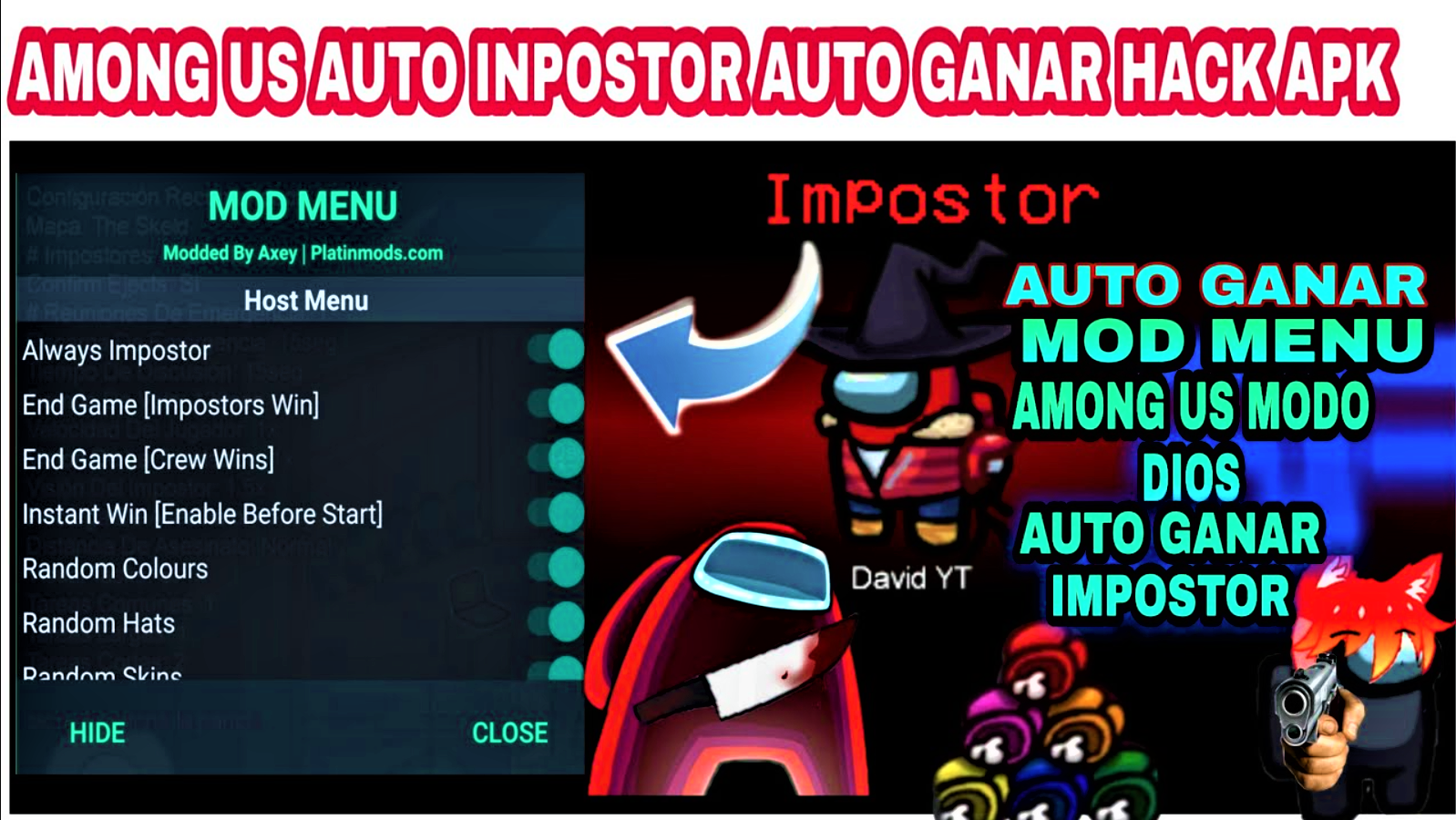 Among Us Hack is something that gives you access to the data of the game. After getting access, you can change the data of the game very easily. It provides cheats and hacks by which you can finish a game in no time. Here are few hacks listed below-

This hack makes you an imposter in every round of the game. It helps you remain invisible. By using this, you will also be able to take advantage of other players.

We all understand the need of speed in among us game. This hack allows the player to run faster across the game in your original character. It’s one of the best ways to protect yourself in the game. It helps the players in earning more points protecting themselves from others.

Wall hack provides the ability to look through the walls or blocks. By this, you can easily see your enemies, even if they are behind the wall or block.

This hack provides a full view of the map without any other help. By this, you will also be able to recognize the imposter and ghosts.

How to use Among Us hack?

Among Us Mods includes :

Among Us Mod APK always Imposter hack unlocks many different features. Some exclusive feature you can get are –

No Ads – This modded version comes with won ads.

Free Accessories – It allows you get accessories such as hats, skins and pets for free.

Rejoin Banned Rooms – It allows players to rejoin the banned rooms from which they are banned.

No-kill cool down – This feature allows you to perform double or triple kills.

Among Us witness a boom in downloading, after the start of the pandemic. Many pro as well amateur gamers started playing this addictive game. And it’s best when games are being played in their original version without any hacks. Hacks always come with the potential to kill the excitement. And cheating with a friend in a board game is for fun, but here it’s different. Game Hack are not ethical for a gamer. So, it’s better to keep the Among Us community clean and give equal opportunity to everyone.

Check out cheats and commands for Stranded Deep here.